After a weekend being in good company of friends, being nourished in both body and heart, I find myself in the kitchen today. It feels like I’m making up for lost time. The week has been bubbling over with activity, so cooking a meal has been little more than an afterthought.
So, gifted with an extra hour in my day, I found myself laying in bed dreaming up what I wanted to make.
Something hot and stew-y, for sure, something sweet, and something with raw elements. 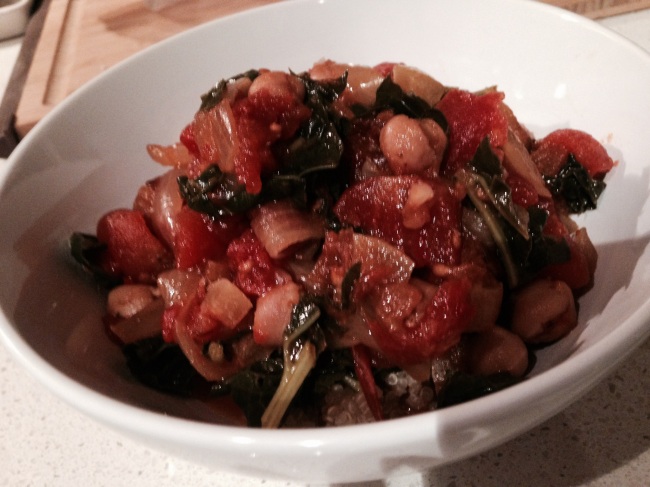 I wanted to create an unctuous, meat-free stew and had been pouring over recipes that paired game-y meats with fruit. I’ve had this thing for Moroccan spices lately and was dying to test out my recent batch of preserved lemon. I use garbanzo beans frequently for hummus and in salads, however I rarely use them in soups, preferring the many varieties of lentils available. Garbanzo beans are firm, nutty and can hold their own in a soup with lots of competing elements. Adding a bit of harissa heightens the flavors and adds extra heat.
This stew is stellar, and can be served with couscous, bread or another grain. I served it over quinoa to give it a bit of a protein boost and keep it a bit lighter, as I always like to keep room for dessert!
Garbanzo Bean Stew with Preserved Lemon
2 onions, sliced thinly
1/4 cup olive oil
3 c cooked garbanzo beans
2 32-oz cans whole plum tomatoes, chopped, juice reserved
1 preserved lemon, insides removed, chopped
3/4 cup dried Turkish apricots, quartered
1 Tbsp harissa
1 tsp cumin
1/2 tsp coriander
2 cinnamon sticks
2 c. vegetable or chicken broth
1 bunch kale, chopped
Method
1. Heat olive oil in a large pot over medium heat.
2. Add onion and cook ~15 minutes, giving a stir every few minutes to evenly caramelize.
3. Turn the heat up to high, and add all remaining ingredients except kale.
4. Once boiling, turn heat down and simmer for ~40 minutes.
5. Toss in kale, allowing it to steam for ~5 minutes, then fold into the stew.
6. Serve over cooked quinoa or couscous; with cilantro and harissa as garnish. 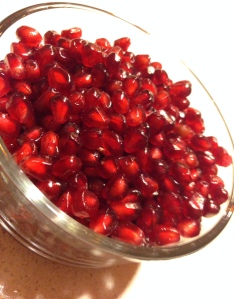 I also had this pomegranate I’d been meaning to break into. As I was waiting for my press to steep my coffee, I spotted the pomegranate and popped myself up onto the counter, knife in hand. A colleague taught me a fancy technique for scoring pomegranate so as not to bruise the fruit. I peeled back the flesh to reveal the plump juicy jewels inside. After plucking away for about 10 minutes, I had a nice full bowl of seeds. I could have easily gone with a simple arugula salad with pomegranate and toasted pistachios, however I also wanted to do a bit of roasting and satisfy my squash addiction. What I ended up with was truly gorgeous and flavorful as well; kale marinated in a lovely vinaigrette and tossed with roasted delicata squash and pomegranate seeds.

Moving on to dessert. Initially, I’d planned to do something with pear and ginger, and then I recalled having a bit of almond flour in my larder. I discovered a recipe on food 52.com, which you can find the link here:
http://food52.com/recipes/7662-pear-and-almond-cake-with-spikey-cream
I made few deviations from the recipe, with exception of increasing the proportion of almond flour to baking flour and substituting olive oil for canola oil. This made for a dense, moist cake, which I served with some vanilla-scented creme fraiche. It was truly divine.
Much Love,
J

Hi Friends! Next up on Redflowerjlhcooks.com:

Two Red Bowls
I made that!
Attila Ovari
Sunny District

Welcome to my happy place!

the title says it all.

This WordPress.com site is the bee's knees

................... for lovers of ice cream. Your free on line magazine for sweet frozen treats. Recipes, inspiration, artisanal ideas for your delectation.

Food Innovator, Recipe Sharer. My kitchen is small but mighty.

Serving up delicious with Instinct and Heart